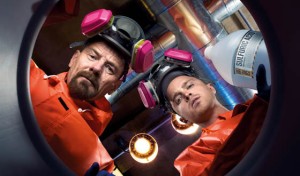 With the final eight episodes of Breaking Bad coming up August 11th, we here at the CockleBur have been spending our days drifting through clouds of the crystal meth cooking in the basement, pondering the fate of our beloved master chefs, Walter White and Jesse Pinkman. When Breaking Bad first aired back in 2008, Walter White (played by three time Emmy winner, Bryan Cranston) was just a sad sack that worked as High School Chemistry teacher and a part-time cashier at a carwash. After being diagnosed with advanced lung cancer and deciding the best way to provide for his family would be to manufacture crystal meth, Walter has transformed from lovable bad guy to one of the most despised and hated characters in television history. He has lied, cheated, stolen, and killed, but like any gangster story, eventually the bad guy must fall, and in these eight remaining episodes we shall finally learn what fate Walter White has bestowed upon himself.

The last episode left off with a trademark cliff hanger from show creator Vince Gilligan, one in which anti-villain Hank Schrader (Walter’s brother-in-law and head of the local branch of the DEA) experiences a literal oh, shit moment, as the audience is lead to believe that Hank has just put together that his former-high-school-science-teaching/current-car-wash-owning, cancer-stricken, brother-in-law is actually the meth dealing kingpin he’s been after for over a year now, the infamous Heisenberg. However, during the past year Hank has greatly benefitted from Walt’s illegal activities (his entire physical rehabilitation treatment was covered by The White Family after he was shot by two assassins sent to kill him), bringing down Heisenberg could also mean committing career suicide. What is likely to happen is for Hank to trail Walt on his own, like he did when following his hunch about Gus Fring (the former kingpin that Walter killed at the end of season 4). The on-screen tension between Bryan Cranston and Dean Norris (who plays Hank) has already made for some of the most intense scenes in the past, so we’re amped up to see how they continue to deceive each other for the final checkmate.

It might just be the amphetamines talking, but we’re also geeked to see how Walter White finally meets his demise. There are plenty of websites that have interpreted the CAT-Scan scene in the final episode to mean that Walt’s cancer has returned, and seeing as how the cancer was what motivated all of this in the first place, that could be a fitting way to end things. Another way, and one which would provide at least some sort of satisfaction to the so-called “good guys”, would be for Walt to go out in a hail of bullets, a la Tony Montana in Scarface. We’ve already seen a foreshadowing of Walt buying an M-60 (Season 5, Episode 1), plus there’s the scene (Season 5, Episode 3) in which Walter and Walter Jr. are sitting in the living room watching the Al Pacino classic, and Walt Sr. makes the comment, “Everyone dies in this movie.” Seems like more than a mere coincidence, especially for a show that employs the Checkov’s gun set up so often. But if he does go out in a hail of bullets, who’s going to be the one doing the shooting? In an interview with Vince Gilligan for Rolling Stone, it was revealed that Cranston had been told the reason he was back

[buying the M-60 in the flash forward scene] was to protect someone. The most likely scenario would be for Walt to protect his family (as opposed to some theorists views that Walt would be going through the trouble of purchasing an M-60 in order to protect Jesse), but the list of potential enemies is too long to even bother speculating over. The only thing for certain is that Walter White will die in the end. Even the man himself admits it.

As for Walter’s (now ex-) partner in crime, the infamous Cap’n Cook, the last time we saw Jesse, Walt had just dropped off a couple gym bags stuffed with cash, presumedly the five million he owed him as his part of the buy out. It’s hard to speculate what role he will play in the final episodes, but one might assume with all that cheddar he can finally get the Hammer up and running again. Apparently it’s been a life long dream of Jesse’s to front a band called TwaüghtHammer. In Season 2, Episode 4, Jesse tries convincing his friend, P, that they should track down Chivo and Anthony to record a demo in an attempt to get back in the local music scene. In fact, in damn near every scene that shows Jesse just sitting around, bored out of his mind, he’s almost always beating on a surface like a drum and mumbling something about “the fallacies, the fallacies.” You figure he might as well finance the band’s demo on his own. What else is he gonna do, smoke it all up?