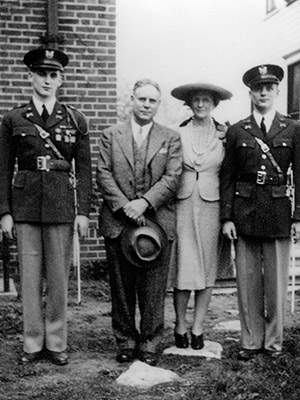 Cockle Legal Briefs was founded in Omaha, Nebraska in 1923 by Albert and Eda Cockle. At that time, their business was commercial printing. They turned to printing legal briefs when an attorney asked them to print a brief he was filing with the Nebraska Supreme Court. Albert and Eda, who both had law degrees, realized this was an opportunity to apply their legal education to the printing business. They became experts in the correct preparation of briefs, and attorneys increasingly began to look to them for advice. This expertise, some 90 years later, differentiates Cockle from its competitors.

In 1930, Eda founded The Cockle Bur, a promotional pamphlet filled with quotes, sayings, and poems, which was mailed monthly to Cockle customers. Some of the best entries have been compiled and published in a book entitled Simple Truths.

When George — Eda and Albert’s son — took over the business in 1965, he decided to make law briefs the company’s sole specialty. He visited every town in Nebraska to listen to attorneys and learn more about their needs. As a result, Cockle became Nebraska’s largest producer of legal briefs.

In the early 1990s, George retired at the age of 75 and turned the business over to his children, Andy and Trish. Cockle has since grown to become the largest producer of U.S. Supreme Court briefs in the country, with a rapidly expanding clientele of federal circuit court filers.

We are honored that attorneys and pro se litigants continue to rely on Cockle’s third generation of experts for legal printing services as we approach our 100th year in business!

I wanted to thank Andy [for connecting us to the right resource to resolve our procedural question].… You could have simply done the printing and charged us for it, but instead you helped us get the procedure correct – even though that obviated the filing.  Thank you!   Lisa A. Mathewson The Law Offices of Lisa A. Mathewson, LLC

This petition is a masterpiece. Don’t ever underestimate what you guys do. I have filed in state appellate and supreme courts, but SCOTUS is a different animal. When someone like me calls you – it’s like planning a wedding or a once in a lifetime event. Thank you.

Thanks again for all of your help with our Brief in Opposition. Your suggestions were pertinent and sensible, and we could not have been more pleased with the printing and presentation of the Brief. We especially appreciated your patience with our many questions concerning the process, and the amazingly quick turnaround.

The oral argument in Haeger v. Goodyear went well! I want to thank you and your staff for the wonderful support and your very kind indulgence.  I hope we have the opportunity to work with you and your office in the future. Please extend my appreciation to your staff. Meeling Tan Jennings, Strouss & Salmon, PLC

I want to thank you and your company for all of your assistance. I have been practicing for over 40 years and have been involved in over 100 cases, and your company provided the most helpful and responsive services that I have ever experienced. Your dedication to making my brief as perfect as it could be was extraordinary. The work was spotless and timely.

Please convey my extreme gratitude to the proofreaders for their careful work. What may seem to be a mere technical matter, is not at all, but is quite important to the persuasiveness of my presentations to the Court.

I have used Cockle for dozens and dozens of briefs and they have done a superb job every time. They are experts on the Supreme Court’s rules and ensure that everything is in compliance with them. They are amazingly fast and always truly a pleasure to work with.

Erwin ChemerinskyDean and Distinguished Professor of LawUniversity of California, Irvine, School of Law

This is to express my appreciation for the expertise and professionalism of your team in processing our amicus brief. The initial proofreading team did a first rate job. I was very impressed by the attention to detail in the second round of edits done by Shelley and Mary Ann. Everyone was most helpful. You have a terrific organization. Many thanks.

One thing is that they’re cheaper. But the second one is, they’ve really got the technology down.” Professor Schnapper says that the third benefit of using Omaha-based Cockle is the company’s proofreading service: “The work is really good. They go over the material with a fine-tooth comb and catch a lot of things.

When we have a question about Supreme Court practices, we know we can call Cockle and get the right answer. We know we can trust their experience in dealing with the Court, its rules and personnel.  The team at Cockle has repeatedly come through for us, including under tight deadlines.  Thank you Cockle!