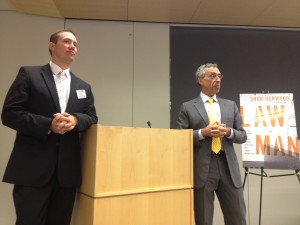 I have just the best friends. Last week, a few friends hosted a LAW MAN book party for me at WilmerHale in Washington DC. The event was hosted by WilmerHale Attorneys Seth Waxman and Noah Levine, UW Law Professor (and my ConLaw teacher) Ronald Collins, Davis & Wright Attorney Robert Corn-Revere, and my good friends from Cockle Printing.

We had over 70 people attend, and the guests included a rather large presence from the Supreme Court bar and press corp, and people from a number of public interest law organizations.

Needless to say, Annie and I were honored to have such kind friends talk about LAW MAN and to see all the support for our story.

My goal for the night was to publicly honor those people who played a profound part in my success and to share how LAW MAN would never have come about if not for their contribution to the story. So, I talked about WilmerHale attorneys Seth Waxman and Noah Levine, who made a jailhouse lawyer a part of their Supreme Court team and who have helped me along every step of the way both inside prison and out. I talked about how Cockle Printing gave a guy just removed from a 10-year prison sentence a job. I talked about Adam Liptak and about how his story at the New York Times was the impetus for LAW MAN. I talked about the University of Washington and Gates Public Service Law Scholarship and how they are helping me to launch a career serving those who are unable to afford adequate legal represenation.

And, as with everywhere I talk about LAW MAN, I thanked my wife, Ann Marie, for writing that postcard back in 2000 that brought me so much hope. 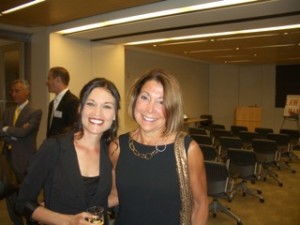 I want to thank everyone who came out to the event. My only regret is that I didn’t have time to talk longer to more of you.