This Week In Supreme Court History: The Birth of The Builder

Home/Uncategorized/This Week In Supreme Court History: The Birth of The Builder

This Week In Supreme Court History: The Birth of The Builder

Since the founding of the Republic, the United States Supreme Court has sat atop the federal judiciary, representing one of the three co-equal branches of government. Yet the Court did not get its own, permanent home until 1935. In that year, the Court moved from the Old Senate Chamber in the Capitol Building, and took up its current residency in the Supreme Court Building, at 1 First Street, N.E., in Washington, D.C. 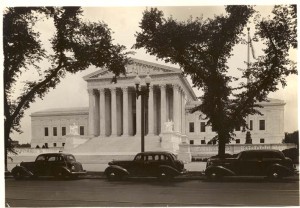 The building’s architect, Cass Gilbert, was born 155 years ago this week in Zanesville, Ohio. When he was a boy, Gilbert’s family moved to St. Paul, Minnesota. Although he initially dropped out of college, he took work at a local architecture firm, then later enrolled in the architecture program at MIT.

During the early part of his career, Gilbert earned regional attention for his work in Minnesota. He designed private homes, churches, railroad depots, and eventually, the Minnesota State Capitol dome.

In 1898, Gilbert moved to New York City and embarked on a career of national acclaim. Known for his work on public buildings across the nation, he became an early celebrity architect. In this period, he served on the U.S. Commission of Fine Arts, won election to the National Academy of Design, and served as the Academy’s president from 1926 to 1933.

A proponent of the Beaux-Arts style, Gilbert is known as a conservative voice in the architectural conversation of the early Twentieth Century. But he was also a pioneer in the field of skyscraper design. One of his most famous works, the Woolworth Building, was the world’s tallest building when completed in 1913. Gilbert’s design approach to the Woolworth became the model for skyscraper architecture for decades after.

In 1929, then-Chief Justice—and former president—William Howard Taft convinced Congress to fund the building of the Supreme Court Building. Gilbert’s design called for marble inside and out, over a classical Corinthian design. Neither Taft nor Gilbert would live to see the completion of the structure, but the building stands as testament to their vision.