A Beginner’s Guide to Supreme Court History: The First 100 Years

A Beginner’s Guide to Supreme Court History: The First 100 Years

This is the second post in our multi-part series which covers the history of the Court—from establishment and its first 100 years to landmark cases and the Court’s future.  Our first installment detailing the Court’s establishment is available here.

At its founding the United States Supreme Court was an appellate court—a body which reviews appeals from cases that have already been heard in a lower court.  It remains so today.  However, during its first decade in existence, the Court heard fewer than 50 cases total.  The first term held in New York City lasted ten days in February 1790.  The second term lasted just two days during August that same year.  Notably, the Court did not decide a single case during its 1791 or 1792 terms. William H. Rehnquist, The Supreme Court: “The First Hundred Years Were the Hardest,” 42 U. Miami L. Rev. 475 (1988). 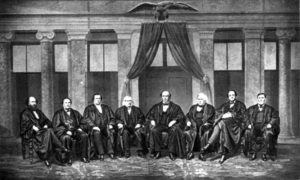 President Washington appointed John Jay as the Court’s first Chief Justice in 1789.  But Jay is best known for his role in negotiating Jay’s Treaty between the U.S. and Great Britain which sought to settle outstanding issues between the two countries left otherwise unresolved following America’s fight for independence.  Jay retired from the bench and never returned to the Court following his ambassadorship in England.

So little attention was paid to the Court in its early years that when the seat of government moved to Washington at the turn of the new century, six months had passed before anyone in power thought to provide the Justices with a place to conduct their business.

On January 20, 1801, “Congress responded … by designating a committee room on the first floor of the Capitol building as a ‘courtroom,’ and there the Court sat for seven years until more spacious quarters were afforded it.”  Id. at 478-479.

President Adams nominated his Secretary of State, John Marshall, as Chief Justice in the fall of 1801. Marshall would serve as Chief Justice for thirty-four years—the longest tenure in that office of any of its incumbents.  Id. at 480.  He would also become one of the most revered jurists in American history.

Adams and Marshall spearheaded the Federalist movement in support of a strong federal government and the concentration of national power.  In conflict with the Federalists, President Thomas Jefferson and Jeffersonian Republicans were suspicious of both national power and the federal court system, advocating instead for states’ rights and the even disbursement of power among local majorities rather than the unelected judiciary.

In 1803, Marshall authored Marbury v. Madison, which handed the Federalists victory and established the proposition that federal courts—the U.S. Supreme Court chief amongst them—have the authority to declare an act of Congress unconstitutional.  The Marshall court also established both the power of Congress to regulate the national economy and the obligation of states to obey federal laws.

President Andrew Jackson appointed Roger B. Taney of Maryland to succeed Marshall upon the Chief Justice’s death in 1835.  Id. at 482.  “Taney in many ways was of a different stripe than Marshall. Marshall was disposed to see things from the point of view of a believer in a strong federal government, whereas Taney took more the point of view of one dedicated to ‘states’ rights.” Id. at 483.

A New York journal quipped about Taney: “The pure ermine of the Supreme Court is sullied by the appointment of that political hack, Roger B. Taney.” It was Taney who would oversee the infamous Dred Scott decision.

Taney became best known for writing the final majority opinion in Dred Scott v. Sanford, which said that all people of African descent, free or slave, were not United States citizens and therefore had no right to sue in federal court. In addition, he wrote that the Fifth Amendment protected slave owner rights because slaves were their legal property.

The decision also argued that the Missouri Compromise legislation—passed to balance the power between slave and non-slave states—was unconstitutional. In effect, this meant that Congress had no power to prevent the spread of slavery.

Facing an unprecedented rebellion, President Lincoln and Congress took extraordinary measures to preserve the Union during the Civil War of 1861-1865.  Some of these controversial wartime actions were challenged in several cases that ultimately reached the Supreme Court:

In the midst of the Civil War, Congress created a tenth federal circuit and briefly added a tenth Justice to the Court to match.  After the war passed, it reduced the Court to seven Justices in 1866. Just three years later, again adhering to Congressional mandate, the number was moved back to nine, where it remains today.

At the Civil War’s conclusion and for the remainder of the Court’s first 100 years Associate Justices drafted important opinions.  Chief Justices Chase (appointed by Lincoln) and Waite (appointed by President Grant) freely assigned major opinions to their colleagues—a trend which bucked past precedent and is continued to date.

The Chief Justices of the post-Civil War era did not achieve the stature of Marshall or Taney, and perhaps for that reason several of the Associate Justices made major contributions during this period of time. Samuel F. Miller of Iowa and Stephen J. Field of California, both appointed by Lincoln, and Joseph Bradley, appointed by President Ulysses S. Grant, each served for more than twenty years and made notable contributions to the jurisprudence of the Court.

The Waite Court decided a number of important cases interpreting the meaning of the Civil War amendments to the Constitution of the United States. It decided, for example, that the fourteenth amendment prohibited racial discrimination in the selection of grand jurors in state courts. It also decided that these amendments forbade only discrimination by the government and not discrimination by private individuals. The Waite Court was also called upon to deal with the public law aspects of the tremendous expansion of the railroads in this country during the Civil War.

Chief Justice Waite died in 1888, 99 years after Jay was appointed as the country’s first Chief Justice.  The institution Waite inherited was vastly different than the one Jay and Washington helped create.  The Court was now an equal branch of the federal government, fit to decide matters of constitutional interpretation.  Over the next 130 years it will be invited to address an array of complex legal issues, ranging from the separation of black and white children in public schools to a woman’s right to an abortion.