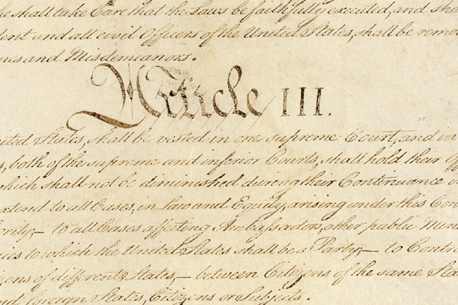 The Supreme Court is often described as distinctly American in concept and function.  We look to it as the last resort in search of justice, equality, and validation of our political views.  It’s where we wage our most serious legal battles––from voting disputes and privacy issues to establishing the rights of women and minorities.

But shockingly few Americans know much about this sacred institution.

In an effort to help educate those in search of basic information about the Court and its history, we present this first post in an ongoing series, which covers the history of the Court––from its establishment and first 100 years to its landmark cases and future.

Article III of the Constitution, which was signed on September 17, 1787, established the federal judiciary. Section I states that “The judicial Power of the United States, shall be vested in one supreme Court, and in such inferior Courts as the Congress may from time to time ordain and establish.” Although the Constitution established the Supreme Court, Congress’ job was to figure out how to organize it.

Congress first exercised this awesome power in the Judiciary Act of 1789, which created one Supreme Court composed of a single chief justice and five associate justices. The Act, which was signed into law on September 24, 1789, also established a lower federal court system comprised of 13 district courts and three circuit courts covering the eastern, middle, and southern areas of United States.

George Washington, the country’s first president, had the unique opportunity to fill the new federal judiciary with his own selections.  Washington tabbed John Jay, a New York diplomat, as the first chief justice.  He also nominated John Rutledge, William Cushing, John Blair, Robert Harrison, and James Wilson as associate justices. On September 26, 1789, all six appointments were confirmed by the Senate.

The Supreme Court assembled the following year in New York City––then the nation’s capital––in the Merchants Exchange Building on February 1, 1790.  Its first cases, however, did not reach the Supreme Court’s steps until its second year. Those earliest sessions were primarily devoted to organizational proceedings.

For the first 101 years of the Court’s existence justices were required to spend most of their time traveling around the country on horseback or in carriages to sit as circuit judges––known as “circuit riding.”  Without circuit riding, it was said, Supreme Court justices would be cut off from the political, cultural, and legal life of the rest of the nation.  As the nation grew and the federal judiciary’s docket swelled, the position of Supreme Court justice soon became, in the words of Justice McKinley, “the most onerous and laborious of any in the United States.” Many justices had to travel over a thousand miles each year, often in perilous conditions.

When exercising appellate jurisdiction, the Court, with a few exceptions, is not required to hear a case.  Parties generally use petitions for writ of certiorari to ask the Court to review their case.

Today, the Court’s primary concern is not in correcting errors in lower court decisions, but deciding cases which present issues of national importance beyond the particular parties involved.  In fact, the Court now grants certiorari (review of a lower court decision) in only about one percent of all cases and four to five percent of “paid cases.”  The vast majority of petitions are simply denied by the Court without comment or explanation.