The Supreme Court Starts One Justice Down

The Supreme Court Starts One Justice Down 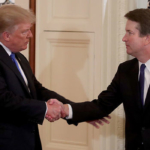 Republicans had hoped to have Kavanaugh confirmed in time for the Court’s first public meeting since it took recess in late June. Trump nominated Kavanaugh on July 10th – 85 days ago.  His confirmation would cement conservative control of the Court with a 5-4 margin.

Court watchers are not sure how long the vacancy will last.  Senator McConnell on Monday and again on Tuesday vowed that the Senate would vote on Kavanaugh’s nomination “this week” … “after the FBI shares what they’ve found” following its supplemental investigation into Kavanaugh’s alleged sexual misconduct during high school and college.

In 2016, after the sudden death of Justice Scalia, Senate Republican Leader Mitch McConnell blocked President Obama’s nomination of Merrick Garland to the Court for nearly a year, leaving it a Justice down, until then newly-elected President Trump could fill the seat with Neil Gorsuch.

An empty seat on the bench often leads to a less exciting caseload, mainly to avoid 4-4 splits between conservatives and liberals.  So far, the Court has agreed to hear about 40 cases, and will add 25 to 35 more by the end of the term.

‘In recent years, whenever the

[C]ourt has been short-handed, we’ve seen it move more cautiously by both agreeing to review fewer total cases and by looking for narrow grounds around which to build consensus in the cases it does hear,’ said Steve Vladeck, CNN Supreme Court analyst and professor at the University of Texas School of Law.

‘Even if Judge Kavanaugh is ultimately confirmed and is on the [C]ourt by the end of October, I still think we should expect this term to be relatively quieter and slower than what we saw last year,’ Vladeck added.  Link.

None of the Justices have spoken publicly on the Kavanaugh nomination, and the Court is likely to continue operating as if above all the politicking.