In a country built on optimism, George Cockle was the most optimistic character of all: the American salesman.  He passed away Friday night at the age of 94.

Traces of the second generation printer remain throughout this building.  From the black-and-white photograph of George sitting at a Linotype machine to the pamphlet he wrote for new employees, memories of George persist. 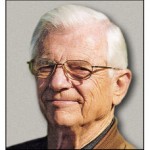 His vision is embedded in the Cockle family story – a story that we reproduce each day on 6-1/8 by 9-1/4 inch booklets filed in the United States Supreme Court.

Cockle is an institution in the legal marketplace and that is because of George.  His character remains ingrained in our organization.  We are indebted to his gratitude, and remain forever in his shadow.

The story began in 1923 when George’s parents, Eda and Albert, started a printing business.  The young lawyers turned from commercial printing to legal brief printing after being asked to prepare briefs for the Nebraska Supreme Court.

Eda and Albert watched George letter in wrestling and tennis at the University of Nebraska.  In 1941, two months after marrying his bride Barbara, George entered the Army as a Second Lieutenant in the 82nd Airborne.  He jumped on D-Day plus 1 with the 325th Glider Infantry Regiment in WWII.

Upon return to the states, George took over the family business, and decided to make brief printing the company’s sole specialty.  A determined man, George focused on becoming the largest brief printer in Nebraska.  A decade later, he had achieved his goal.  Five years after that, he would be the only brief printer in the state.

In the early 1990’s George turned the business over to his children, Andy and Trish. He called it, “one of the smartest moves of my life.”  Cockle Legal Briefs is now the largest Supreme Court printer in the United States.

At a glance, it seems as though the briefs George spent his life producing were just another product to be sold.  They’re printed on opaque, unglazed paper.  Stacks of them fill shelves in the basement of this 60 year-old building.

Look a little closer at those shelves, and you’ll realize that George spent his life translating others’ vision into reality.  He spent his career helping tell stories.  George’s work persuaded Chief Justices and shaped decades of legal precedent.  His work contributed to the development of racial equality and gender empowerment, environmental protection, and the promotion of a just society.

And George treated every customer with respect – from the prestigious Washington D.C. litigator, to the mother whose son sat waiting on death row.

His character and leadership have determined the character of our organization.  Thanks to George, there is so much momentum here, so much continuity and strength amongst ownership and employees.  He will be missed.