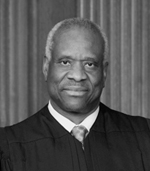 Clarence Thomas, Associate Justice, was born in the Pinpoint community near Savannah, Georgia on June 23, 1948. He attended Conception Seminary from 1967-1968 and received an A.B., cum laude, from Holy Cross College in 1971 and a J.D. from Yale Law School in 1974. He was admitted to law practice in Missouri in 1974, and served as an Assistant Attorney General of Missouri, 1974-1977; an attorney with the Monsanto Company, 1977-1979; and Legislative Assistant to Senator John Danforth, 1979-1981. From 1981-1982 he served as Assistant Secretary for Civil Rights, U.S. Department of Education, and as Chairman of the U.S. Equal Employment Opportunity Commission, 1982-1990. From 1990-1991, he served as a Judge on the United States Court of Appeals for the District of Columbia Circuit. President Bush nominated him as an Associate Justice of the Supreme Court and he took his seat October 23, 1991. He married Virginia Lamp on May 30, 1987 and has one child, Jamal Adeen by a previous marriage.

When asked during an interview with legal writing expert Bryan Garner in “The Scribes Journal of Legal Writing” what he thought was the most important part of the brief, Justice Thomas answered:

Oh, I like the summary of the argument. I think that it gives you a preview. It’s like giving you, you know, what’s going to be on TV next week. If you watch the television program 24, you know what’s going to happen next week. Or it says, “Here’s what I’m going to tell you.” I remember I got that from Justice Black — he would be very upset when someone left the summary of the argument out. Each of us reads a brief differently. I never read the jurisdiction statement or anything like that. I don’t read the facts. I go right to what you have to say. And then there are some of the points, to me, I don’t care, because you’ve thought about those.

During an appearance at Harvard Law School, Justice Thomas explained the logic behind his writing:

What I tell my law clerks is that we write these so that they are accessible to regular people. That doesn’t mean that there’s no law in it. But there are simple ways to put important things in language that’s accessible. As I say to them, the beauty, the genius is not to write a 5 cent idea in a ten dollar sentence. It’s to put a ten dollar idea in a 5 cent sentence.

The editing we do is for clarity and simplicity without losing meaning, and without adding things. You don’t see a lot of double entendres; you don’t see word play and cuteness. We’re not there to win a literary award. We’re there to write opinions that some busy person or somebody at their kitchen table can read and say, “I don’t agree with a word he said, but I understand what he said.”

As a U.S. Supreme Court Justice, Clarence Thomas has taken a very textualist approach to legislative interpretation, working to uphold the original meaning of the Constitution as well as the original meaning of statutes. Clarence Thomas is generally looked at as one of the most conservative members of the Supreme Court. He has very often approached issues of federalism in a way that limits the federal government’s power while expanding the power of local and state governments. Meanwhile, Clarence Thomas’s opinions have typically suggested a powerful role for the executive branch within the federal government.