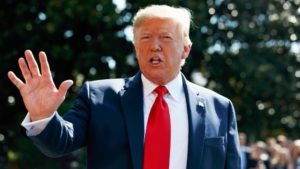 A complaint from an intelligence community whistleblower last month led to reports that focused on interactions between President Trump and Ukrainian President Volodymyr Zelensky. During their call, Trump is alleged to have repeatedly pressed the Ukrainian government to investigate political rival Joe Biden and Biden’s son Hunter, who served as director of a Ukrainian energy company.

Trump is alleged to have placed a hold on almost $400 million in U.S. military aid in a quid pro quo arrangement.  The House of Representative’s ongoing impeachment inquiry is driven to uncover what exactly Trump wanted the Ukrainian government to do.

A requisite majority of the House has already publicly endorsed impeachment proceedings as a result of the inquiry, though Democrat Speaker Nancy Pelosi has not scheduled an official vote. The ultimate outcome of the proceedings will depend on the Senate. Republican Senate leader Mitch McConnell has told his caucus to be prepared for a trial that will go six days a week and could last six to eight weeks.  It will take 67 votes to convict President Trump, though Republicans control the Senate 53-47.

The Supreme Court is destined to play one of two roles in President Trump’s impeachment should the House’s inquiry into his Ukraine dealings lead to a vote.

The U.S. Constitution establishes that “[t]he House … shall have the sole Power of Impeachment” and that “[t]he Senate shall have the sole Power to try all Impeachments.”  Essentially, House lawyers serve the role of prosecutors while White House lawyers are defense counsel.  Chief Justice John Roberts would act as judge as Senators serve as jury.  Quartz’s Ephrat Livni explains the Chief Justice’s potential involvement amid an already jammed-packed Supreme Court docket:

The Chief Justice handles a presidential impeachment trial because it wouldn’t do to have the vice president, who routinely presides over the senate, play that role. After all, the vice president is next in line for the [presidency], and shouldn’t have to be [] judge while his boss is on trial. But because it would be unseemly to have just anyone handle a matter of such gravity, it falls to the most powerful judge in the land. So, if Trump is put on trial, Roberts will have his work cut out for him.

If the impeachment inquiry into Trump ultimately leads to the House presenting articles of impeachment for the Senate to try, it will likely be the most controversial case on Roberts’ busy docket. A long list of contentious cases are before the court. The upcoming term will see a fight over the definition of sex in civil rights, a gun law showdown, and the fate of Dreamers, people who were brought to the US illegally as children and have since built lives in the country. The Supreme Court will also address the question of the separation of church and state, and religious freedom considerations.

The Trump administration has stonewalled the House’s impeachment investigation by blocking witnesses from testifying and ignored subpoenas by asserting executive privilege—the right of the President and other members of the executive branch to maintain confidential communications and to resist oversight by the legislative and judicial branches.  Trump also maintains that the House’s impeachment investigation itself is unconstitutional, a claim he’s made in a lawsuit against the House Ways and Means Committee’s attempt to force the release of his tax returns.

Before the Ukraine scandal erupted, lawsuits over Congressional subpoenas seeking documents and testimony—some filed by Congress, others by the Trump administration—were already working their way through the courts. With an impeachment investigation now underway, the courts are facing unsettled constitutional questions. When a Congress taking up impeachment runs headlong into a president claiming executive privilege, which side prevails? When a Congress performing oversight runs into a president who claims that oversight is a fraud, who wins?

In almost every scenario, the president can expect victory. Even if he loses these cases at the Supreme Court, it may only be after a long judicial process that could run out the clock on impeachment, perhaps even past the 2020 elections. Even better for Trump would be if the court, guided by Chief Justice John Roberts, creates new precedent protecting the president, or decides the judicial branch shouldn’t get involved in impeachment decisions—a win by default that would allow Trump to continue to stonewall.

Should the impeachment case make its way to the Supreme Court, the Justices will likely expedite its consideration and call for briefing.  Stay tuned to the CockleBur for updates.