Though Supreme Court Justices are a bright bunch they are not renowned for their technological savvy.  In fact, the Court itself has been openly technophobic at times.  In his 2014 year-end report on the judiciary, Chief Justice Roberts explained that “[t]he courts will always be prudent whenever it comes to embracing the ‘next big thing,’” technologically-speaking.

And while the Roberts Court boasts an average age of 66-years-old (decisively not ancient, for those of you eligible to collect Social Security), previous iterations have provided some notable technological quotes and gaffs.

“Does it say: ‘Your call is important to us, and we will get back to you?’”

–  Justice Kennedy during oral argument regarding what happens when text messages are simultaneous sent and received.

“Could [Petitioner] print these spicy little conversations and send them to his buddies?”

– Justice Scalia during the same oral argument about the prospect of copying text messages.

“If I’m applying the First Amendment, I have to apply it to a world where there’s an internet, and there’s Facebook. And there are movies like The Social Network, which I couldn’t even understand.”

– Justice Breyer during a speech to students at Vanderbilt Law School.

“The Justices are not necessarily the most technologically sophisticated people…. The Court hasn’t really ‘gotten to’ email. Justices write memos printed out on paper that looks like it came from the 19th century.  The memos are then walked around the building by someone called a ‘chambers aide.’”

– Justice Kagan when asked about the Court’s usage of email* by Ted Widmer, a historian at Providence’s Brown University.

*Via a 2018 Freedom of Information Act inquiry, VICE News reveals that Justices Kagan and Sotomayor did in fact use official ‘.gov’ email addresses in 2010 and 2013.  A total of three emails reveal communication between the Justices and the Solicitor General’s Office.

Justice Gorsuch reveals that one of his Clerks tried to fax Justice Kennedy an early draft of Gorsuch’s first majority opinion (per Kennedy’s request).  However, Kennedy’s home fax machine wasn’t working that evening, so Kennedy requested that the young Clerk hand courier the draft to his house that same night. 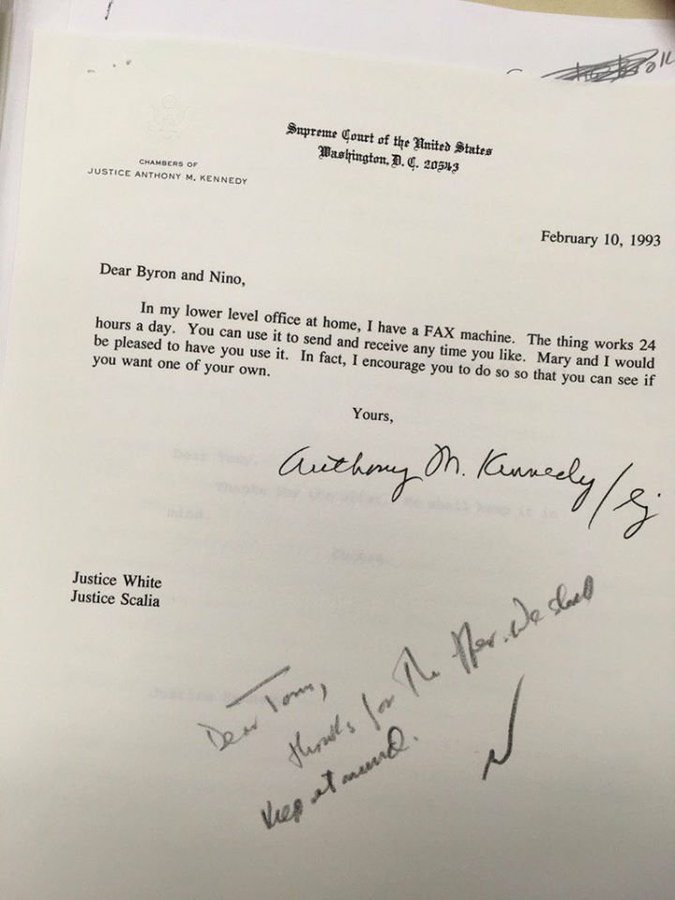 (Pictured: Justice Kennedy writes Justices Scalia and White in reference to his new fax machine in 1993, via @jarvis_best on Twitter.)