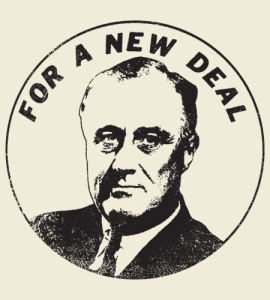 In the era of the New Deal, Franklin Roosevelt saw several cherished reforms get thrown out by the Supreme Court. On this day in Supreme Court history, May 27, 1935, three separate decisions were handed down which struck against Roosevelt’s power.

One, Humphrey’s Executor v. United States, declared that Roosevelt could not dismiss regulatory appointees (in this case a member of the Federal Trade Commission) for political reasons alone. Only in the case of crimes or gross neglect could a President do so. Secondly, in Louisville Joint Stock Land Bank v. Radford, the Court determined that a recent law went too far in protecting indebted farmers vs. the contractual rights of creditors to foreclose. And finally, in Schechter Poultry Corp. v. United States, the Court invalidated the National Industrial Recovery Act (NIRA) for conferring too many open-ended powers on the Executive branch. This final decision struck Roosevelt the hardest, as the NIRA had been a central piece of the New Deal regulations.

In Schechter Poultry Corp. v. United States, a kosher chicken dealer sued the government, charging that the NIRA was unconstitutional. The case tested the legality of certain methods used by Congress and President Roosevelt to combat the devastating economic effects of the depression.

The Supreme Court struck down as unconstitutional a provision of the NIRA that authorized the President to approve “codes of fair competition” for the poultry industry and other industries. These codes regulated schedules of minimum wages, prices, maximum work hours, collective bargaining, and other rules that would be binding upon entire industries. Drawing upon the nondelegation doctrine and the Commerce Clause of the Constitution, the Court struck down this piece of President Franklin Roosevelt’s New Deal legislation. First, the Court characterized this activity as intrastate transactions with effects that were only indirect in the sphere of interstate commerce. Thus, Congress had overstepped its bounds by regulating local commercial activity. Second, by giving the Agency for Industrial Recovery a broad mandate to ensure “fair competition,” Congress had effectively delegated legislative power to the Executive. This Congress could not do. The Court found an absence of standards and procedures in the statute to guide the President in deciding which regulations to impose upon various industries.

The NIRA was the centerpiece of Roosevelt’s plan to stabilize the national economy, and the government’s loss in the Sick Chicken case marked the end of the NIRA and its fair trade codes. After the U.S. Supreme Court declared the methods unconstitutional, Roosevelt publicly scolded the Court declaring that the Court’s “horse-and buggy definition of interstate commerce” was an obstacle to national health. He later used the decision as one justification for a controversial plan to stock the Court with Justices more receptive of Roosevelt’s programs.