The Appeals Process: From Trial Court to the Supreme Court

The Appeals Process: From Trial Court to the Supreme Court

How does a case reach the Supreme Court?  Well, it can be complicated.  But most cases progress routinely down a well-blazed trail (or system of trails).  Without a map, you can get lost — so let this blog serve that purpose as I guide you along the path to the Supreme Court.

You Have to Start Somewhere 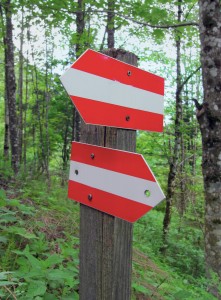 Your case will generally begin in one of two places:  a state trial court or a federal district court.  A one-size-fits-all discussion of the state courts is tricky because each state has a different system.  Generally, your case will begin in a local trial court.  If you lose, you will appeal your case to your state’s intermediate court of appeal.  If you lose again, you must apply to your state’s court of last resort – usually referred to as the state supreme court.  In most states, the court of last resort gets to pick only the cases they wish to decide.  If your state court of last resort rules against you, or refuses to hear your case altogether, then you must petition the U.S. Supreme Court to hear your case.

In the federal system, the trial courts are called United States District Courts.  There are currently ninety-four district courts.  There is at least one district court in each state and one each in the territories.  Some states have more than one district court, such as California, New York and Texas.  Once the District Court rules against you, the next stop on the way to the Supreme Court is one of the thirteen federal courts of appeals.  Two are located in Washington D.C.: the D.C. Circuit and the Federal Circuit.  The other eleven circuits are spread out geographically and are identified by number.  Generally, an appeal to your designated circuit court is decided by a three-judge panel.  But the circuit court can also hear cases “en banc”, by either a nine-judge panel or the entire court.  If you lose in the circuit court, you have the choice to either ask the circuit court for a rehearing or to bring your appeal to the U.S. Supreme Court.  You have ninety days to appeal, counting from either the date of the denial of rehearing, or the date of the circuit court’s opinion.

When you appeal your case to the U.S. Supreme Court, you begin the process by filing a petition for writ of certiorari, often referred to as a cert petition.  In your cert petition you will set out the issues, the facts, the history of the case, and the reasons why the Supreme Court should review the decision of the court below.  Your argument should demonstrate to the Court that there is either a conflict between circuits; the lower court’s decision conflicts with Supreme Court precedent; or the case poses a question of federal law that is so important that the Supreme Court should pass upon it, even absent a conflict.

Once all of the cert stage briefs are filed, they are distributed to the Justices’ chambers to be reviewed by one of the Justice’s law clerks.

If you are one of the lucky ones whose cert petition is granted, your case will progress on to what is known as the merits stage, where a whole new round of briefing takes place.  Just as in the petition stage, you will file your brief; your respondent has the opportunity to respond; and you have the option to reply.  The focus in brief writing at the merits stage shifts from why your case should be granted to why you should win.

At oral argument, you get to stand before the nine justices and tell them why you should win.  Each side gets a half-hour to spend arguing their case.  The petitioner usually reserves five minutes for rebuttal after the respondent’s argument.  The justices can interrupt with questions whenever and as often as they like.  If you are representing yourself pro se, don’t worry.  The Court only lets attorneys who are members of the Supreme Court bar participate in oral argument.

Later that week, the Justices hold a private conference during which they vote on how to decide the case.  The senior justice in the majority decides who will write the majority opinion.

There are many variations and exceptions to the basic Supreme Court appeals process outlined above.  But at Cockle Legal Briefs, we are experts when it comes to the Supreme Court’s Rules and practices.  Appealing a case to the Supreme Court is complex and can be a stressful task.  Our job is to try and alleviate some of your stress by ensuring that you present a rule compliant brief.  Give us a call to discuss filing your next brief.