How to File a Stay in the Supreme Court

How to File a Stay in the Supreme Court 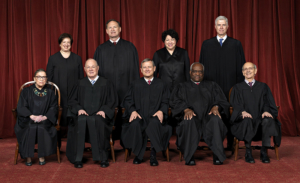 Supreme Court Rules 22 and 23 govern applications for stays. Per Rule 23, a stay may be granted by a single Justice, and any party to the judgment may file an application to stay its enforcement. Regarding the content of an application for a stay, Rule 23.3 states:

Rule 22.3 provides that an application will go to the Justice assigned to the Circuit that the case arises from. Assignments of which Justice presides over each federal circuit change with the Court’s membership. The Supreme Court’s website shows that as of May 2020, following the appointment of Justice Neil Gorsuch, the circuit assignments are as follows:

The Justice receiving the application may act alone, or may refer the application to the full Court. If the application for a stay is referred to the Court, five Justices must vote to grant the stay (compared to the four votes required to grant a petition for writ of certiorari). An interesting practice note is what’s referred to as the “courtesy fifth”: when a Justice crosses an ideological line to provide the needed fifth vote in order to maintain the status quo while the order in question is being examined.