This is, after all, what we do.

To have it not just cited but reviewed by someone who isn’t an academic…well, I should be dancing.

I am dancing. But I am quibbling too.

This is, after all, what we do.

I wrote an academic article—Inheriting Inequality: Wealth, Race and the Laws of Succession. It was published in a law review (thank you, Oregon Law Review!).

It was reviewed by Too Much, the “online weekly on excess and inequality” published by the Institute for Policy Studies. They called it a “delightfully subversive new essay.” (You understand why I am dancing.)

And they got the argument right: People who get lucky by winning the Powerball lottery get taxed on their winnings, while people who get lucky by being born into affluent families get their inheritances tax-free. Inherited wealth gets passed down from generation to generation and reinforces the socioeconomic status quo. This dynamic goes a long way toward explaining the vast gap in wealth between Blacks and Whites—a gap grounded in slavery, Jim Crow, and other historical practices.

In light of all this, taxing inheritances as income the same way we tax lottery winnings as income seems only fair.

There might be other reasons for taxing inheritances—as I mentioned in an earlier post (such as Michael Kinsley’s idea of the baby boomers paying down the national debt).

But I think reducing the continuing effects of past discrimination is right up there.

Thank you, Too Much.

The Too Much reviewer coins the term “gene lottery” to refer to having the luck to be born into a family with resources and getting an inheritance windfall.

I want to be clear: These are NOT MY WORDS.

“Birth lottery” I can go for—with gratitude for a clever and evocative turn of phase. “Birth lottery” and “Powerball lottery” both refer to events where chance directs unearned wealth to individuals on a random basis.

But birth is about so much more than genes. It’s about family position, history, culture, tradition, and reputation.

Race is a social construct. It was constructed for economic gain. The economic shirttails of that garment still cover us today.

Let me repeat myself.

Race is a social construct. It was constructed for economic gain. The economic shirttails of that garment still cover us today.

Which means that it’s more than a quibble.

And the crocuses are in bloom in Washington. 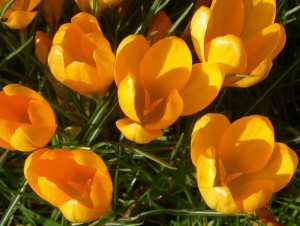 Update:  Thanks to Prof. Gerry Beyer to linking to Inheriting Inequality on the Wills, Trusts & Estates Prof blog.