65 is one of those magic ages here in the U.S.  We drive at 16; we vote at 18; we drink (legally) at 21; we retire at 65.  Why?  Because that was the age at which full Social Security benefits traditionally kicked in.  As a result, 65 became the age at which the transition to “senior” citizen occurred.

Well, one part of it is that 65 also isn’t what it used to be in terms of simple aging.  Since Social Security passed in 1935, the average additional life expectancy of Americans who have already turned 65 has increased about 5 years.

Another factor is the bulge passing through our demographic snake—the baby boom generation born in years 1946 through 1964 after World War II.  (That red bump in the middle of the graph is 1957.) 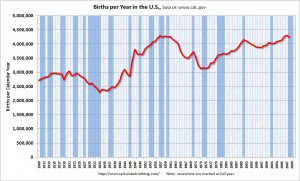 There is, after all, a major difference for Social Security between us paying in and us drawing out.

In any case, the 65 that the very first baby boomers turned at the beginning of this month is different than it used to be in that they—we—are likely to live longer and work longer.  We will also likely continue to have a thumb on the scale in terms of setting the national tone and agenda just because there are so many of us.

Nonetheless, the boomers turning 65—because it has for so many years been a kind of gateway to elderhood—seems a milestone.

It’s a milestone because it raises the question of the role of the elder, and in particular about the kind of elders that we boomers will be.

This put me in mind of a Michael Kinsley piece in The Atlantic last fall: The Least We Can Do.  Kinsley suggests that boomers consider stepping up to the plate by paying an income tax on inheritances we receive from our parents and using the proceeds from that tax to pay down the national debt.  In this way we would use the wealth from the postwar economic boom to better the lives of future generations.

Kinsley proposes that we use the proceeds from this tax to pay down the national debt.  But it could just as well be used for reducing the number of children in poverty, investing in schools or infrastructure, or improving resilience in the face of climate change.  The point is to think ahead, to use current wealth to put future generations on as solid a footing as possible.

Anticipating resistance to this idea, Kinsley closes with an admonition to his fellow boomers: “

[We]’re all in this one together…. [and] democratic government is a way of saying ‘I will if you will.’”

This is where Kinsley lost me.  In my view, the social contract approach, which is what his words evoke, is a pretty chintzy view of democracy.  It assumes that people are motivated exclusively by self-interest, and it is particularly inapt when the issue at hand is of concern to a lot of people beyond us, the supposed “social contractors.”

Sure, people are self-interested, but that’s not all we are.  There is another, more civic, view of democracy as a network of relationships: Because people are connected to others, they are motivated to look out for each other and to contribute to the good of the whole.

These distinct views of democracy offer a choice to all of us, but especially to boomers as we move into the role of elder.  Will we be governed by game theory or will we play a more civic role?

The baby boom was not predicted and not expected.

The elder boom is both, and we will be it.

What will we do with that knowledge?