Implicit Bias and Equal Protection: A New Game of “Pick up Sticks”?

Home/Constitutional Law/Implicit Bias and Equal Protection: A New Game of “Pick up Sticks”?

Implicit Bias and Equal Protection: A New Game of “Pick up Sticks”?

Implicit bias, as I observed in my prior post on Connick v. Thompson, is bias that is unconscious rather than conscious.  The fact that bias is implicit, however, does not mean that it is not invidious.  Implicit bias can have real, tangible discriminatory effects–in the criminal justice system and elsewhere.

I found several aspects of the DC Conference worth noting.

First, the mere fact of the conference and its subject.  Implicit bias—especially racial bias—is difficult to acknowledge.  By simply discussing implicit bias, the DC Judicial Conference took a leadership role in this area.

as the cornerstone presenter for the Conference. Dr. Banaji is a preeminent researcher on implicit bias, one of the developers of the Implicit Association Test (IAT), and a presenter who can hold an audience of several hundred lawyers enrapt for almost three hours—no small feat. If you EVER have the chance to hear her, jump at it.

Dr. Banaji walked us through the psychological evidence regarding implicit bias. She explained how our brains operate at two different levels, with our subconscious often making unsupported and incorrect assumptions. And she emphasized that law “gets it wrong” by looking only to the conscious brain and intentionality.

Getting Dr. Banaji to speak was, I believe, a strategically sound move by the Conference planners.  People tend to be skeptical about that which they cannot see, and implicit bias thus needs to be proven.  This skepticism may, as one of the later presenters noted, be particularly strong in lawyers in large part because we are, at the conscious level, committed to fairness and so have a difficult time believing that we ourselves might be discriminatory at the unconscious level.

Third, the final speaker of the day, federal Judge Mark Bennett of the Northern District of Iowa, a pioneer in the field of concrete innovations to counteract implicit bias in actual courtrooms, made reference to the fact that an awareness of implicit bias may have substantial implications for discrimination law.

Let’s walk through that.

Equal Protection jurisprudence, under Washington v. Davis, requires intent for a finding of actionable discrimination and, under Parents Involved in Community Schools v. Seattle School District #1, places severe limits on race-based treatment generally.  Title VII, on the other hand, defines disparate impact as unlawful (though a prescribed proof protocol must be followed).

In Ricci v. DeStefano, the 2009 New Haven firefighters case, the Supreme Court—in this game of constitutional “Pick Up Sticks”—managed to remove another one without the others falling down, holding essentially (as per blogger Philip Miles) “You can treat individuals differently, but only if there’s really good evidence that you must do it to avoid ‘disparate impact.’”

Implicit bias, which disallows the option of denying that discrimination is occurring just because it isn’t the result of conscious acts, will make this game even harder to play.

In Ricci, Justice Scalia, in one of his “pointing the way” dissents, defined the issue presented as whether the disparate impact provisions of Title VII conflict with the Equal Protection Clause, observing that “the war between disparate impact and equal protection will be waged sooner or later, and it behooves us to begin thinking about how—and on what terms—to make peace between them.”

I would surmise that in that war Justice Scalia would vote to eradicate disparate impact discrimination entirely.

Implicit bias says, “Not so fast.”

And doesn’t that mean that race-based “affirmative action” to address implicit bias and remedy the disparate impact it can cause is not only constitutionally permitted but mandated?

I cannot predict how these questions will ultimately be answered, but I suspect that implicit bias may be the hand that casts a new game of Equal Protection “Pick up Sticks.” 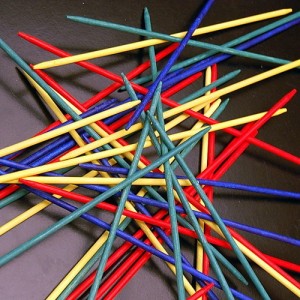