What is the Supreme Court?

Throughout its history, the Supreme Court has played a crucial role in interpreting and applying federal laws and shaping the development of the U.S. legal system.

How are Supreme Court Cases Chosen? 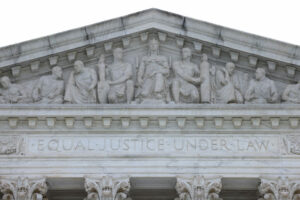 The Supreme Court has the power to hear cases of national importance. However, it is not required to hear every case that is brought before it. Instead, the Court uses a system called “certiorari” to decide which cases to hear.

Under this system, the Court receives petitions from parties who are involved in a case, asking the Court to hear their case. These petitions are called “certiorari petitions” or simply “cert petitions.” The Court then reviews these petitions and decides which cases to hear based on a variety of factors.

Another important factor that the Court considers is whether the case presents an issue that has been addressed differently by different lower courts. This is known as a “circuit split” and can occur when different federal courts of appeals have reached different conclusions on the same legal issue. In these cases, the Supreme Court may choose to hear the case to resolve the split and provide clarity on the law.

The Supreme Court also considers whether the case is a good vehicle for addressing the legal issues at hand. This could include cases that have a clear and well-developed record, cases that involve parties with a strong interest in the outcome, and cases that are likely to have a significant impact on the law.

Ultimately, the Supreme Court has the discretion to decide which cases to hear, and it uses a variety of factors to make this decision. The Court typically hears less than 100 cases per year out of the thousands of cases that are brought before it.

Why Do Supreme Court Justices Serve for Life?

Supreme Court justices serve for life because the Founders wanted to create an independent judiciary that would not be subject to political pressure or influence. By providing for life tenure for federal judges, the Founders sought to ensure that judges could make decisions based on the law and the Constitution, rather than on political considerations.

Life tenure for federal judges is established in Article III of the Constitution, which states that federal judges “shall hold their offices during good behavior.” This means that, once appointed, a federal judge can only be removed from office through a process known as impeachment, which is a very difficult and rare occurrence.

The idea behind life tenure for federal judges is that it allows them to make decisions without fear of reprisal or retribution. This means that judges can rule on cases without worrying about how their decisions might affect their future job prospects or their personal relationships. It also means that judges can make unpopular decisions without fear of being removed from office by a future political administration.

In addition to providing for life tenure, the Constitution also protects the salary of federal judges, stating that it “shall not be diminished during their continuance in office.” This means that judges cannot have their salary reduced as a form of punishment or retribution for their decisions.

Overall, the life tenure of Supreme Court justices is an important feature of the United States’ system of government, as it helps to ensure the independence and impartiality of the judiciary.

Which Justices are Conservative, and Which are Liberal?

Although political ideologies can be complex and personal, some people use a justice’s past decisions as a basis for identifying their political leanings. For example, some people consider Clarence Thomas, Samuel Alito, Amy Coney Barrett, Neil Gorsuch, and Brett Kavanaugh to be more conservative, based on their past decisions on issues such as gun control and the death penalty.  Meanwhile, decisions by Sonia Sotomayor and Elena Kagan on reproductive health and abortion reflect a more liberal outlook.  Justice Ketanji Brown Jackson—recently appointed by President Biden—is thought to be more liberal.

Who is the Chief Justice?

John G. Roberts, Jr. is the 17th and current Chief Justice of the United States. He was appointed to the position by President George W. Bush in 2005, and he has served on the Court since then. Prior to becoming Chief Justice, Roberts served as a judge on the U.S. Court of Appeals for the District of Columbia Circuit.

In addition to his role as Chief Justice, Roberts also serves as the head of the federal judiciary. In this role, he is responsible for overseeing the administration of the federal courts and working to ensure the efficient and effective operation of the U.S. legal system.