Posner: Supreme Court Should Have 19 Members

Posner: Supreme Court Should Have 19 Members 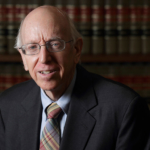 “We have a very crappy judicial system.”

Posner – one of the leading legal minds of his generation and America’s most frequently cited legal scholar – continued, via the Chicago Tribune:

Posner … repeated his complaint that politicians are more concerned with appointing ‘tokens’ such as women or Hispanic justices, and with would-be justices’ politics than they are with merit.

Posner, who was appointed by President Ronald Reagan, said no president since Herbert Hoover has appointed a Supreme Court justice who ‘was not in either his personal or his political interest.’

‘The modern presidents don’t think that way, but if the Supreme Court was much larger, they might say, ‘Well, OK … we have 19 justices, 12 of them are highly politicized, but we have these extra 7 seats, so we’ll appoint them on the basis of quality,’ and that would make a big difference.’ ’

Famously, President Franklin D. Roosevelt attempted to pack the Court when he proposed language for the Judicial Procedures Reform Bill of 1937.  Roosevelt wanted more Justices to ensure that his New Deal programs would survive upcoming judicial review.  However, the legislation was fiercely opposed by Congressmen on both sides of the aisle.

Following Judge Posner’s logic, a larger bench would help ensure that the Court doesn’t find itself as a political football during an election year.  A larger bench would also mean that more staff would be available to review the roughly 8,000 petitions filed with the Court each term – increasing the odds that a meritorious petition does not slip past an overworked clerk.