An Introduction to the Supreme Court, Part I

An Introduction to the Supreme Court, Part I

The Supreme Court is often described as distinctly American in concept and function.  We look to it as the last resort in search of justice, equality, and validation of our political views.  It’s where we wage our most serious legal battles – from voting disputes and privacy issues to establishing the rights of young and old – and its decisions have far-reaching implications for our citizenry. This three-part guide is designed to give some background information on the Court, its justices, and some common practices.

Part One: The Bench and the Bar

Article III of our originating document – the Constitution – provides that “the judicial power of the United States, shall be vested in one supreme Court.”  The Court, which sits atop the Federal Judicial branch, was created to check the power of the Executive and Legislative branches, interpret the Constitution, and restrict governmental encroachment on values deemed fundamental to liberty. 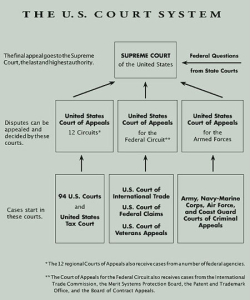 The Court first assembled on February 1, 1790 in New York City, which was then the nation’s capital.  The first cases, however, did not reach the Supreme Court’s steps until its second year. Those earliest sessions were primarily devoted to organizational proceedings.

The Supreme Court now convenes in Washington, D.C. and conducts its annual Term from the first Monday of October until the end of June the following year. Interestingly, more than 30 percent of an average Term’s opinions are issued in June, and more than half of those are typically issued in the final week of the month.

The Constitution limits the Court’s reach to “Cases” and “Controversies.”  Its primary concern is not in correcting errors in lower court decisions, but deciding cases which present issues of national importance beyond the particular parties involved.  In fact, the Court grants certiorari (review of a lower court decision) in only about one percent of all cases and four to five percent of “paid cases,” wherein the petitioner pays the Court’s $300 filing fee and submits a booklet format petition.  The vast majority of petitions are simply denied by the Court without comment or explanation.

Litigating at the Supreme Court – as opposed to filing an appeal – is known as an Original Action.  Here, the Court’s jurisdiction is original, but not mandatory.

Article III of the Constitution gives the Court original jurisdiction over several small but important categories of cases:

In these actions, parties bring their disputes directly to the high court, bypassing all lower courts.

Members of the Court are referred to as “Justices,” and like other Federal judges, they are appointed by the President of the United States and confirmed by the Senate for a life term.  There are nine Justices on a full court – one Chief Justice, and eight Associate Justices.  The Chief Justice, as head of the United States Supreme Court, presides over its public and private sessions.

Excluding Senate confirmation, there are no formal requirements for becoming a Supreme Court Justice.  Though today’s Court is comprised entirely of Ivy League graduates, 57 percent – or 64 out of 112 Justices – never attended law school.  Shockingly few Americans know much about the bench.  According to a FindLaw.com poll, only 34 percent of Americans can name a member of the nation’s highest court while just one percent can name all nine (full bench at time of poll) Supreme Court Justices.

Under Article II of the Constitution, the President has the power, by and with the advice and consent of the Senate, to appoint Supreme Court Justices. Since Justices are appointed for life, each nomination has a long-lasting influence on the Court and on the day-to-day life of every American.  The most recent successful nomination to the Supreme Court was that of Justice Elena Kagan in 2010.  On March 16, 2016, President Barack Obama nominated Merrick Garland, the Chief Judge of the United States Court of Appeals for the District of Columbia Circuit, to fill the Supreme Court seat vacated by the death of Antonin Scalia on February 13.  Judge Garland’s nomination is still pending.

Each Justice receives hundreds of qualified applications per year from candidates with top grades and compelling personal stories.  But only a fortunate 36 receive this most coveted credential.

Though the Court keeps its internal operating procedures largely confidential, we know that law clerks have a significant impact on a Term’s caseload.  They share much of a Justice’s work and can influence his or her thinking.  By wading through the cert. pool to make recommendations about which cases the Court should consider, a clerk operates in concert with his or her Justice.

Clerks are also responsible for researching case law, preparing the Justice for oral argument, and drafting significant portions of majority and dissenting opinions – often without significant revisions from individual Justices.

Have questions about a Supreme Court filing?  Give us a call at (800) 225-6964 or email contact@cocklelegalbriefs.com today!