Friendly Persuasion: The Increase and Influence of Amici Curiae at the Supreme Court

Home/Supreme Court/Friendly Persuasion: The Increase and Influence of Amici Curiae at the Supreme Court

Friendly Persuasion: The Increase and Influence of Amici Curiae at the Supreme Court 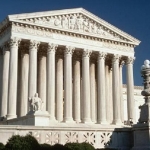 The 2014-2015 term broke records for most amicus briefs filed in a single case (147 in No. 14-556; Obergefell v. Hodges) and the most signatories on a single brief (207,551 signatories calling for full nationwide marriage equality via The People’s Brief filed in Obergefell).

Those are a lot of numbers to illustrate an obvious point: Supreme Court amici participation has never been higher.  But how influential are these new “friends of the Court?”  According to the Justices who have openly applauded their expertise, very.

Justice Breyer has said that these briefs ‘play an important role in educating judges on potentially relevant technical matters, helping to make us not experts but educated lay persons and thereby helping to improve the quality of our decisions.’  Justice Alito concurs, observing that ‘

[e]ven when a party is very well represented, an amicus may provide important assistance to the court . . . [by] collect[ing] background or factual references that merit judicial notice.’ And former Supreme Court law clerks have remarked that it is the ‘non-legal’ information provided by amici that is the most useful.

The rise in the number of amicus briefs, and their importance to the Court’s consideration of a case on the merits (as well as to the decision to grant discretionary review in the first place), heightens the importance of parties obtaining solid amicus support for their petition and merits briefing.

Amicus support at the petition stage is most helpful in demonstrating the widespread importance of the issue and need for immediate guidance from the Court.  At the merits stage, an amicus can fill one of three important roles, according to Inside Counsel’s M.C. Sungaila (a Cockle client).  Amici can contribute by:

If you are considering the submission of a petition or merits stage amici brief, give Cockle a call at (800) 225-6964 to discuss amici quiddities and cost.