The Dean of the Supreme Court Press Corps 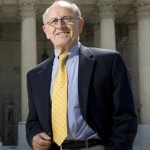 The Dean of the Supreme Court Press Corps has covered the entire careers of all nine members of the Roberts Court and reported on one-quarter of sitting justices in the Court’s storied history.  In his six decades as a reporter, Lyle Denniston has developed an exhaustive knowledge of the Supreme Court’s docket.

Though he’s not an attorney (he married one instead), he has taught classes on law, journalism, and constitutional history at Georgetown, Penn State, Johns Hopkins, and American University.  In a 2007 C-SPAN interview he joked that he has “always indulged the arrogance of saying the only time I’ve ever been in a law school was to teach.”

While we work with experienced Supreme Court practitioners every day, we’re hard pressed to find an individual with a deeper knowledge of Court history than Mr. Denniston.

Some might expect the 83 year-old grandfather of six to spend his days immersed in a hobby or steering one of his two sailboats.  Instead, Mr. Denniston remains a proxy for the public at the steps of the Supreme Court.  When asked a couple of years ago by CNN what keeps him going, he said:

My father retired and it was virtually the end of his life…He really declined after that. A long time ago I made up my mind that I would find something active to do, even though I left newspapering and sort of thought I was retired….It is just so immensely fascinating to me and I do find that having a prolonged institutional memory about the court and about the law and particularly about the Constitution makes it even fun for me to do. And it allows me to be an even greater resource for my readers.

The team at Cockle Legal Briefs is looking forward to years of continued coverage from the Dean.