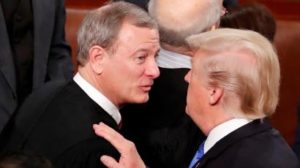 Chief Justice John Roberts issued his annual year-end report on the federal judiciary December 31st. He capped 2019 by decrying the corrosive effects of “rumor and false information” on American democracy, particularly in this online age.

And though the report outwardly praised civics education, its subtext pointed directly towards President Donald Trump.  The Chief Justice will, off course, preside in Trump’s impending Senate impeachment trial.

The Washington Post’s Robert Barnes believes that the Chief Justice appeared to allude to this upcoming role when he spoke of the need “to judge without fear or favor, deciding each matter with humility, integrity and dispatch.”  Barnes notes that “Roberts praised the independence of the federal judiciary, a subject on which he has crossed swords with President Trump, who has criticized as biased the judges who have ruled against him and his administration’s policies.”

The two men have a history of friction, and Chief Justice Roberts used the normally mild report to denounce false information spread on social media and to warn against mob rule. Some passages could be read as a mission statement for the chief justice’s plans for the impeachment trial itself[:] “As the new year begins, and we turn to the tasks before us, we should each resolve to do our best to maintain the public’s trust that we are faithfully discharging our solemn obligation to equal justice under law.”

Ultimately, Roberts did not stray drastically from the substance in his previous year-end reports – a celebration of our nation’s strong and independent judiciary.