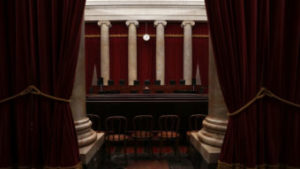 Starting Monday, attorneys who appear before the Court are allotted two minutes of uninterrupted time at the beginning of oral argument.  It may not seem like much, but those familiar with recent trends recognize it as a significant departure from longstanding courtroom procedure.

Today’s Supreme Court is known as a “hot bench,” wherein some of the Justices’ questions advocate positions rather than seek information.  Attorneys are also frequently interrupted by the Justices early into their allotted 30-minute remarks.  In fact, during the 2020 Census arguments last term, Justice Sotomayor interrupted the Solicitor General just 16 seconds into his address.  During the landmark 2012 Obamacare proceedings, in which the Justices heard an unprecedented six hours of argument, 11 lawyers averaged a mere 52 seconds before being cut off.

‘Supreme Court arguments are notoriously unpredictable,’ said Steve Vladeck, a CNN Supreme Court analyst and professor at the University of Texas School of Law who has argued before the justices.

‘This change may seem remarkably modest to outside observers, but it means that advocates will now be able to predict how long they’ll have for their openings — and tailor the substance and rhetoric to maximize having a captive audience,’ he added. ‘The real question is what happens when the two minutes are up.’

The change was promulgated – not as an official Court rule – but an unexpected addition to the revised “Guide for Counsel” issued by the Clerk’s Office on October 3rd.  The Guide illustrates:

The Court generally will not question lead counsel for petitioners (or appellants) and respondents (or appellees) during the first two minutes of argument.  The white light on the lectern will illuminate briefly at the end of this period to signal the start of questioning. Where argument is divided and counsel represents an amicus or an additional party, the white light will illuminate after one minute.

The two-minute warning is a variation of guidance used in other appellate courts.

The first test of the new system came Monday in No. 18-6135, Kahler v. Kansas, a capital case about whether the 8th and 14th Amendments allow States to abolish the insanity defense.  SCOTUSblog’s Mark Walsh recapped the procedure’s maiden voyage:

Sarah Schrup of the Supreme Court Practicum at Northwestern University’s law school is representing the petitioner, James Kraig Kahler, who was convicted of murdering four relatives and is challenging Kansas’ lack of an affirmative defense of insanity.

Schrup delivers her practiced opening, and the justices obediently observe their new procedure. At two minutes, Talkin turns on the white light for a few seconds. As soon as it flashes off, Ginsburg is first to interrupt Schrup, who is in the middle of saying she would “like to now turn back to history …”

“Well, before you do that …” Ginsburg says, asking a longish question about due process….

The Justices and attorneys seemed reasonably happy with the two-minute change in tradition.