And think about this: the opposite of loyalty is betrayal.

The reason for all this loyalty talk is because I must define mine this week.

In two days, I start first year orientation at the University of Washington School of Law. I’m a Husky. But I’ve lived the majority of my life in Nebraska, growing up with Cornhusker football. I’m a Husker.

This week the Huskies play the Huskers in football.

Which side will I choose to root for?

But I’m at the school of Huskies, not Huskers.

If my choice of who to root for was based solely on law school rankings, it would be an easy choice: purple and gold.

If my choice was based on nothing but football programs, it would be an easy choice: scarlet and cream.

So how do I choose?

I’ve not taken so much as a class at the University of Nebraska. And they turned down my law school application.

Washington didn’t. And they gave me an incredible scholarship to pay for my education.

The Huskers have given me memories.

The Huskies will help provide memories for my children.

Now you see why my loyalty is being challenged.

Which side will I choose?

I’ll let this picture do the talking. 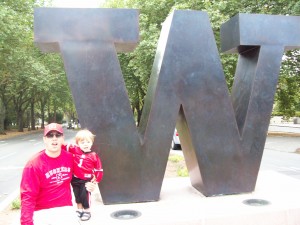 My son, Mark, and Me on the University of Washington campus

Listen, I love UW, and I plan on being a loyal Husky forever (except of course when they play the Skers). And if this was a contest of law schools, I’d be dressed from head to toe in purple and gold.

But let’s face it, this is football. And my heart already belongs to another.

The first time I remember watching football was 1982. The whole Turner Gill, Mike Rozier, and Irving Fryar era. The first time I ever remember praying to God was during the 1984 Orange Bowl, right before the play below (still the gutsiest call by a coach, ever). I was 8 years old, and I bawled myself to sleep when we lost.

God didn’t answer my prayers that night, but he did in 1994, 1995, and 1997. With names viscerally etched into my memory, names like Tommie Frazier, Ahman Green, Grant Winstrom, Trev Alberts, and Tom Osborne.

Sure, the Huskers have gone through a rough patch of late, but that doesn’t justify trading my red in for shiny purple and gold.