The End of the Death Penalty?

Home/Prisoners/The End of the Death Penalty?

The End of the Death Penalty? 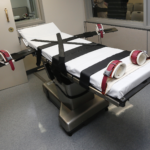 Could the death penalty – never far from the Supreme Court’s docket – be nearing its demise?  Few issues have caused the Court more discomfort since the turn of the Century.

Despite the procedure’s significant cost to taxpayers and opposition groups’ efforts to abolish, federal and state courts continue to impose the death sentence.

[T]he many opinions issued [by the Supreme Court] since 1972 form such a tangled thicket that the late Justice Harry Blackmun ultimately dismissed the entire enterprise as “tinker[ing] with the machinery of death.” Several other Justices have turned against the process after leaving the court, including two of the three architects of the system, Lewis Powell and John Paul Stevens. Amid the confusion, one principle has remained clear: death is different. http://time.com/deathpenalty/

During the 2016 term, the Supreme Court largely went out of its way to reverse death sentences it encountered.

In Buck v. Davis, in an opinion written by Chief Justice John Roberts, the Supreme Court leaped multiple, virtually insurmountable procedural obstacles and standards to allow lower courts to reach the merits of a challenge that indisputably raised concerns, though the concerns were created by the defendant’s own lawyer, not by any action of the state or the prosecutors.

In Moore v. Texas, the Supreme Court invalidated a death sentence by deciding to survey and utilize the current state of psychological and medical knowledge regarding mental capacity in the course of rejecting a legal test on that subject previously adopted by the Texas courts.

Yet another example of a ruling in favor of a capital defendant is the Supreme Court’s very first decision of the term, a per curiam opinion in Bosse v. Oklahoma. In that death-penalty case, the Oklahoma courts rejected a challenge to the admission of evidence from the victim’s family members about their characterization of the defendant and their views on the appropriate sentence.

Similarly, the Supreme Court in a per curiam opinion reversed a decision of the Nevada Supreme Court upholding a death sentence in Rippo v. Baker. In Rippo, the defendant claimed that his trial judge was biased because the judge was the subject of a federal bribery investigation and the state prosecutor’s office involved in the defendant’s case was also assisting the federal investigation.  http://www.scotusblog.com/2017/06/death-penalty-symposium-court-increasingly-uncomfortable-death-penalty/

On January 8th, the Court issued a summary ruling in Tharpe v. Sellers, sending a Georgia death row inmate’s case back to the lower courts on procedural grounds (over a 13-page dissent by Justices Thomas, Alito and Gorsuch).

The Big One?  Hidalgo v. Arizona

Pending before the Court at the certiorari stage is Hidalgo v. Arizona, No. 17-251.  The case has been distributed and redistributed for consideration five times – a sign that a cert. grant or GVR is likely.

Katyal argues that the death penalty is cruel and unusual punishment in violation of the Eighth Amendment.  “The Constitution’s proscription on cruel and unusual punishments protects, at its heart, human dignity…. The content of that proscription is not frozen in time, but grows in light of the evolving standards of decency that mark the progress of a maturing society.”

The state of Arizona, in opposition, makes clear that Hidalgo is culpable for the murder of a man and the egregiousness of his crimes were not in dispute at trial:

As this Court has repeatedly explained, “the Eighth Amendment’s protection against excessive or cruel and unusual punishment flows from the basic precept of justice that punishment for a crime should be graduated and proportioned to the offense.” Grounded in that principle, this Court has held that the Eighth Amendment prohibits capital punishment only for defendants who either: (1) had a diminished culpability for the crime (e.g. juveniles or those with intellectual disabilities); or (2) committed a crime that is disproportionate to a capital sentence (e.g. non-homicide offenses against individuals).

Stay tuned to the CockleBur for developments on this issue.