Whom Should I Serve in the Supreme Court?

Home/Preparing Your Brief/Whom Should I Serve in the Supreme Court?

Whom Should I Serve in the Supreme Court?

Sup. Ct. R. 29 governs service of Supreme Court documents.  Rule 29.3 mandates that “three copies shall be served on each other party separately represented in the proceeding.”  Let’s take a look at how service is accomplished at the petition and merits stages.

Petition for Writ of Certiorari:*

A petition must be served on all parties to the proceeding in the court below who do not join in the petition, including those who may have once been aligned with the petitioner.  This practice ensures that parties determine for themselves whether they should remain in the case.  All parties other than the petitioner are considered respondents in the Supreme Court.

Rule 12.6 Letter: The petitioner may elect not to serve a party to the lower court proceeding by notifying the Clerk that the party has no interest in the outcome of the petition.  Counsel should include a letter to this effect with his or her Supreme Court filing, and serve a copy of this letter on the uninterested party.  A party noted as no longer interested may choose to remain a party by notifying the Clerk of an intention to remain active.

Service on a party represented by counsel must be made on the party’s counsel.  If a single counsel cannot be determined, service may be made on the attorney most likley to notify the party below that a petition has been filed.

Respondent must serve counsel of record for the petitioner (evidenced by his or her appearance on the Court’s docket) and counsel for each other separately-represented respondent who does not join the brief in opposition being filed.  Amici filers do not need to be served. 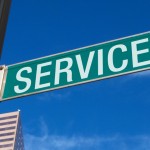 An amicus curiae filer must serve counsel of record for both the petitioner and respondent as they appear on the Court’s docket.  If counsel for the respondent cannot be determined (because they have not yet filed a waiver or application for extension of time), amicus filers must individually determine on whom service should be made (contacting petitioner’s counsel is a good start).