Supreme Court Rule 33.1 sets out the requirements for the legal brief format. Subpart (b) of that Rule provides very specific directions for the font: Supreme Court booklet briefs must be typeset in a Century family type.

Why so specific? Century is a fairly common font, but it is not as universal as, say, Times New Roman. Some computers do not even have Century installed (and even if your word processing program lists a Century font, your document file will not print Century unless the font has been installed onto the computer). Wouldn’t the objectives of the Rule—to provide the Court an easily readable document—be well-served by simply requiring the legal brief format to use a typeface from a list of many popular and readily available fonts? 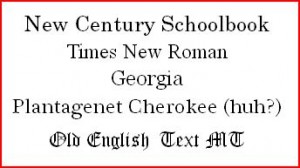 Supreme Court Practice, 9th Edition (Gressman, et al., 2007) offers some insight into the specific font requirement for the Supreme Court legal brief format. The exclusively Century standard is actually a fairly recent addition to the legal brief format requirements. In 2003, the Rule merely required any Roman-style type that was “similar to that used in the…United States Reports.” Id. at Ch. 6.23(b)(2). In 2005, the Court issued informal guidelines that specifically approved non-Century fonts like Times New Roman. Id. But the 2007 revision to the Rules eliminated all fonts outside the Century family. Id.

Gressman, et al., note that the Clerk’s Comments to this “substantially more restrictive” version of Rule 33.1(b) explain that the changes were “intended to make documents ‘more readable’ and ‘to provide clear guidelines for preparing documents.’”

Perhaps more illuminating, the 2007 Rules also eliminated prior Rule 33.1(b) language that “strictly prohibited” the practice of using thinner fonts and reduced character spacing to increase the amount of text that could be squeezed into documents limited by earlier page-count restrictions. Both a shift to word-count limits, and the exclusive use of a single font family, made this admonition unnecessary. Id. at note 88.

The Clerk’s Comments about “clear guidelines” for the legal brief format, considered along with the deletion of the no-squeezing language, give us some insight to the rationale behind the Century-only standard. The Court isn’t trying to impose some top-down esthetic of typeface beauty. Rather, the Rules seem to have evolved towards more enforceable metrics of document size limits. So long as all filers use a correctly-sized Century font, and keep the word count below the limits described in Rule 33.1(g)—both standards being objectively confirmable at the time of filing—then all filers will have the same chance to present their arguments fairly to the Court.