Electronic “Filing” and the Supreme Court

Electronic “Filing” and the Supreme Court 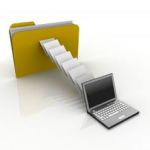 Courts “often choose to be late to the harvest of American ingenuity,” wrote Chief Justice John Roberts Jr., in the Supreme Court’s 2014 year-end report on the state of the federal judiciary.  “Courts understandably proceed cautiously in introducing new information technology systems until they have fairly considered how to keep the information contained therein secure from foreign and domestic hackers, whose motives may range from fishing for secrets to discrediting the government or impairing court operations.”

In this vein, the Supreme Court has placed restrictions on the types of documents it will accept electronically.  Filers often ask us, “Should I email my brief to the Court?”  “Do I email opposing counsel?”

Electronic Transmission to the Supreme Court

The Supreme Court requires that counsel email it an electronic (PDF) version of the following documents on the day of paper copy filing:

See the Court’s Guide to the Electronic Submission of Briefs on the Merits for a detailed discussion on merits stage electronic naming conventions, required statements of service, etc.  As a matter of convenience, the Court will also accept an electronic version of the following petition stage documents in order to expedite distribution:

Under Rule 29, “An electronic version of

[any]
document shall also be transmitted to all other parties at the time of filing or reasonably contemporaneous therewith….”

Filing in the Supreme Court

E-mailing a document does not obviate the requirement that a hard copy be timely filed.  The Court maintains a hard and fast rule that “filing” is not accomplished under Rule 29.2 until the paper version of a document is: