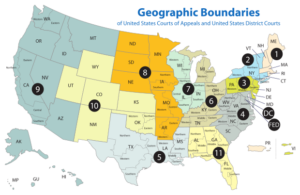 The federal court system was established by the Constitution, which gives Congress the power to create and regulate federal courts. Our first federal courts were created by the Judiciary Act of 1789, which only established district courts and the Supreme Court. The Act also created the office of Attorney General and provided for the appointment of federal judges by the President, with the advice and consent of the Senate.

The Eighth Circuit was established on March 3, 1891, by the Evarts Act, which also created the Ninth and Tenth Circuits. It is headquartered in St. Louis, Missouri, and it consists of 12 judges, who are appointed by the President and confirmed by the Senate.

Throughout its history, the Eighth Circuit has played a significant role in the development of federal law, particularly in the areas of criminal law and civil rights. Some notable cases from the court’s history include United States v. Miller (8th Cir. 1939), which established the constitutional basis for federal firearms regulation, and Horton v. Goose Creek Independent School District (8th Cir. 1969), which expanded the scope of Title IX of the Education Amendments of 1972.